The Apostle Paul in the Bible

Paul in the Bible is also known as the apostle Paul. He is sometimes known as Saint Paul.

Paul was instrumental in setting up the early Christian Church - the beginning of Christianity.

Much of the second part of the Bible - The New Testament consists of Paul's letters (Epistles) to those groups who were following the message of Jesus. The letters encouraged and instructed those Paul had met to continue in their new faith.

Modern Bible scholarship suggests that at least some of the letters ascribed to Paul in the Bible were not written by Paul himself. 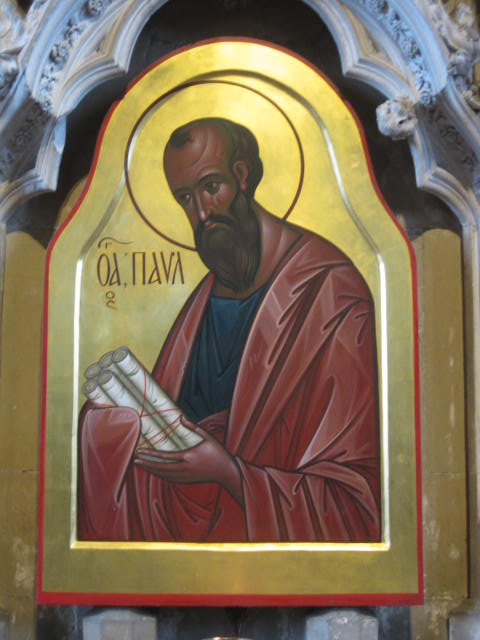 The above image of St Paul in the Bible is an icon by Sergei Fyodorov, situated in Winchester Cathedral, England.

Icons are believed to convey the presence and the power of the person they represent when they are studied in prayerful meditation.

(Move to read the previous article about the different books which make up the Bible.)

Many of us may feel sad that we are divided as Christians into so many different denominations, but it is nothing new. There were many different Jewish sects around at the time of Jesus.

Paul was from one of the strictest Jewish sects – the Pharisees.

The Bible tells us that there were Pharisees who listened to Jesus in his lifetime. For example, he went to dinner with the Pharisee, Simon.

Paul did not meet the living Jesus. We hear of him after the crucifixion as a man who saw the followers of Jesus as corrupting the Jewish faith.

He set out to imprison or kill these followers in order to preserve Judaism as he perceived it.

On the road to Damascus, he then received a revelation of Jesus.

He fell to the ground and heard a voice say to him, "Saul, Saul, why do you persecute me?"
(Acts 9:4, NIV, Bible quote about Paul)

His sight was later restored although probably only in part.

"Ananias left and entered Judas’ house. After he placed his hands on Saul, Ananias said, “Brother Saul, the Lord Jesus, who appeared to you on your way to Damascus, sent me to you. He wants you to see again and to be filled with the Holy Spirit.”

Immediately, something like fish scales fell from Saul’s eyes, and he could see again. Then Saul stood up and was baptized. After he had something to eat, his strength came back to him."

Paul was subsequently committed to spreading the message of Christ.

Paul himself remained a Jew and speaks of how we should respect the Jewish faith.

However, he preached a message that all of us could be united by belief in Jesus and belief in our salvation through the death of Jesus on the cross and, especially, through belief in his resurrection.