Does It Have To Be
Religion Versus Science?

The question of religion versus science is sometimes raised in today's secular society with the assumption by many that the two are not compatible. 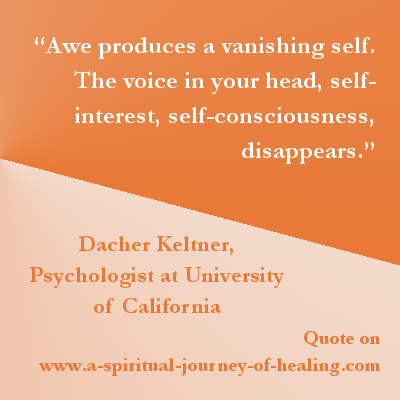 Articles on Religion Versus Science:

1. Scientists Who Are Religious

2. Science Was Cultivated Within Religious Establishments

3. Religion And The Theory Of Evolution Co-Exist

4. How Do The Bible and Science Agree?

5. There is No Proof Either Way

7. A Journey of Exploration

8. Can We Meet Others' Beliefs In A Spirit of Scientific Inquiry?

9. Religion and Science People - Who Do Both?

10. Books On Religion Versus Science

11. Do Beliefs Create Our Reality?

12. Calling In A New Reality

1. Scientists Who Are Religious 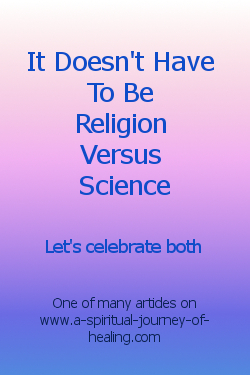 Science is studied at religious schools throughout the world. Within most of those establishments it doesn't occur to anyone that religion and science are incompatible. The two diciplines live happily side by side.

I attended a Catholic secondary school. I remember my Physics teacher saying that the Universe is a wonderful mystery and we have the joy of trying to puzzle it out.

Some students will go on to lose their religion and keep their science.

Some will pursue religion or spirituality and drop their scientific studies.

Others will maintain both.

Can it be religion versus science when so many eminent scientists have believed in God? Here are some of them:

More recently, Francis Collins who was a leader in the human genome project, converted from being atheist to Christian. He writes in his book that he sees scientific discoveries as an opportunity to worship.
He founded the BioLogos Foundation to contribute to the harmony of science and faith.

See a list of those working currently within both spirituality and science.

2. Science Was Cultivated Within Religious Establishments and Cultures

In considering the question of religion versus science, it is interesting to note that science was born in the medieval universities and established and nurtured by the Christian religion.

"Professors at a university got their title originally from their profession of religious vows."

The theory of the Big Bang was put forward by the astrophysicist and Catholic priest, Georges Lemaître. Other astronomers at the time suspected that he was motivated by trying to find a "scientific basis" for the idea of a Genesis point. "Fr Lemaître himself denied this, and he personally urged Pope Pius XII not to promote his theory as such a proof."

In 1987, in a letter marking the 300th anniversary of the publication of Newton's Prinicpia, Pope John Paul II wrote:

"Science can purify religion from error and superstition; religion can purify science from idolatry and false absolutes.
Each can draw the other into a wider world, a world in which both can flourish."

(The information in the point above is from various church articles by Br Guy Consolmagno SJ, Vatican astronomer.)

When it comes to new scientific developments, religion opposes science at times. But it is interesting to note that new scientific ideas are also typically opposed by the scientific establishment itself. For example, research into DNA was referred to by other scientists as 'witchcraft'.

The Islamic empire - a forum for the discussion of ideas

Here in the UK, one of our scientists, Jim Al-Khalili , presented a wonderful series on the BBC called Science and Islam (available on youtube at the time of writing).

Far from religion versus science, he gives many examples of how Science was moved forward. Here is one.

At the height of the Islamic Empire, the Empire paid extremely highly for books to be brought to the Empire. They were then translated into Arabic.

There was a forum within which all ideas, all cultures and religions could be discussed, with the one condition that the discussion must take place in Arabic.

The wisdom of different cultures was shared and developed. Progress was made, in many areas, including mathematics and medicine.
For example, Algebra is named after the book "Kitab Al-Jabr" written by the Muslim mathematician Muhammad ibn Musa al-Khwarizmi, in the 9th century.

Articles related to Religion versus Science.

Or visit some sites by my colleagues: